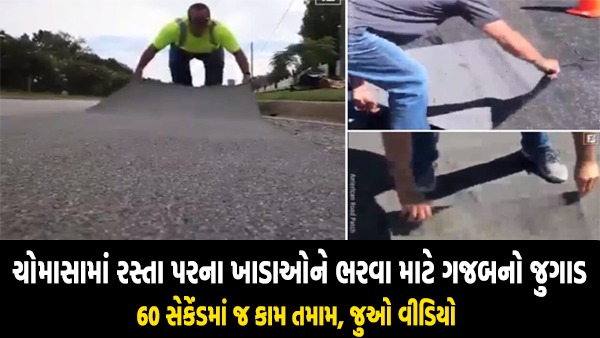 Monsoon season is going on and due to rain many roads and roads are getting damaged. Due to such bad roads, many people also become victims of accidents. Often due to the water in the pothole lying on the road, the pothole is not visible and accidents occur. Many people have lost their lives in such an accident, now the country’s leading industrialist Anand Mahindra has shared a video, in which the solution to the pothole on the road can be seen.

Anand Mahindra frequently shares such videos which inspire people. He is quite adept at giving new updates to his followers. In a video, businessman Anand Mahindra pointed out a technique that could prove to be excellent for filling potholes. He called it important for his country. Through this post he has seriously talked about this pothole filling technique.

The video going viral is actually an advertisement for a product made by American Road Patch, a US-based company. In which patches are being used to lubricate the wear and tear of the road by filling small potholes. This is one such road repair option, which simplifies the process and takes less time. Sharing the clip, Anand Mahindra said – “I would say that this is a new technology, which is necessary for India. Some construction companies need to either build something similar or collaborate with this firm.

I’d say this is an innovation that’s essential for India. Some building/construction material company needs to either emulate this or collaborate with this firm and get it out here pronto! pic.twitter.com/LkrAwIOP1x

This is not the first time that Anand Mahindra has shared such videos for the benefit of people, he has been sharing Avanwa videos before this as well. After watching this video, users have also given their reactions. Some people said that the roads here are worse than this. Some people even gave examples by posting videos.