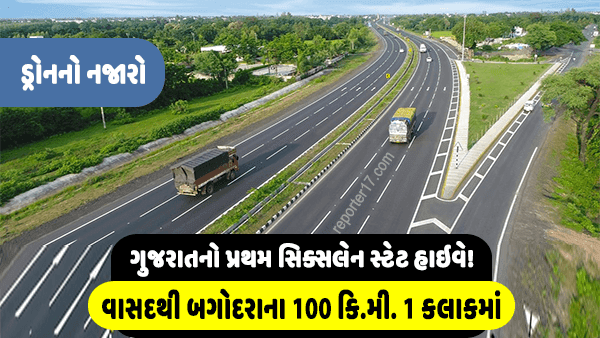 Along with economic ties, Surat and Saurashtra also have cultural ties. To bridge the gap between these two geographical regions, the state government has allocated Rs. A 101 km 6 lane highway between Vasad-Bagodara has been constructed at a cost of 1005 crores. Also, drivers on this highway are exempted from toll tax. Earlier it used to take about two and a half hours to cover this distance, but now this distance will be covered in just one hour and also Gozara accidents will be avoided.

The Gujarat government has made the Vasad-Bagodara highway, the main road connecting Saurashtra and South Gujarat, 6 lanes in two phases. According to a toll plaza official, this is the first 6-lane highway constructed by the Gujarat government in the state. On this highway, except for drivers, toll tax is charged only from large vehicles including trucks. While vehicles up to LMV i.e. Light Motor Vehicle are exempted from toll.

Vasad to Bagodara is a total distance of 286 km using National Highway 48 between Surat and Bagodara, which has a total of 6 toll plazas, due to which tax has to be paid at 4 except two toll plazas, while heavy vehicles are charged toll tax at all 6 toll plazas. is coming. It takes a total of 5 hours to cover this distance.

Approximately 40,000 vehicles pass through this highway every day. Amreli and Surat are connected and this road is used by motorists. 18 fly overs and 38 km service road have been constructed on the 48 km long 6 lane highway. In which 24 underpasses, around 1.3 lakh square meters of strong wall have been constructed, there will also be around 1200 street lights and 38 bus stands on this highway.

A 12-lane toll plaza has been constructed at Bochasan on the highway where modern technology has been used and other necessary facilities have also been set up, including facilities such as ambulance, patrol vehicle, crane, traffic, first aid, drinking water and toilets. Along with this, PTZ cameras, video recognition technology, speed measuring devices have also been used on highways.

Satyam Dhakan, an Amreli businessman involved in the travel business, whose buses ply between Amreli and Surat, says, “This highway will save about two hours for buses plying between Surat and Amreli and three hours for car drivers. This will save fuel. But there will be savings, the toll tax is also not that much.”